Three Rings to the Elven Kings under the shining sky

The first verse you encounter when reading “The Lord of the Rings” could be used as a synthesis to describe our village.

Perhaps it will not be possible to meet Elves by visiting the village but surely we will meet many times the number “3” (which we incidentally remember being considered the “perfect” number).

Already from the toponym Trisobbio, deriving from “Tre Sobrii” (= three sober people), a theme that is explored in the section of the site dedicated to the Municipal Coat of Arms.

Trisobbio, like other towns in the area, can be divided into a central nucleus (the centre of the town), the hamlets and farmhouses scattered throughout the territory.

The town, seen from above, immediately shows some unique characteristics.
Starting from shape of the village that develops in three concentric rings, almost symmetrical. A very rare shape although certainly functional for defense and protection.

First ring is Via Cavour, and includes the Castle and the walls.
Second ring, corresponds to Via Italia and Via De Rossi, hosting the Municipality, the Parish Church and the Oratory.
Third ring, via Mazzini and via Garibaldi, the S.A.O.M.S. , the “Old Schools” building and the court.

The first ring, sometimes called “Borgo Castello” is characterized by a recently laid cobblestone pavement. From it the alleys, sometimes very narrow, branch off, leading to the second ring and that offer characteristic glimpses, between the houses and the small internal courtyards. 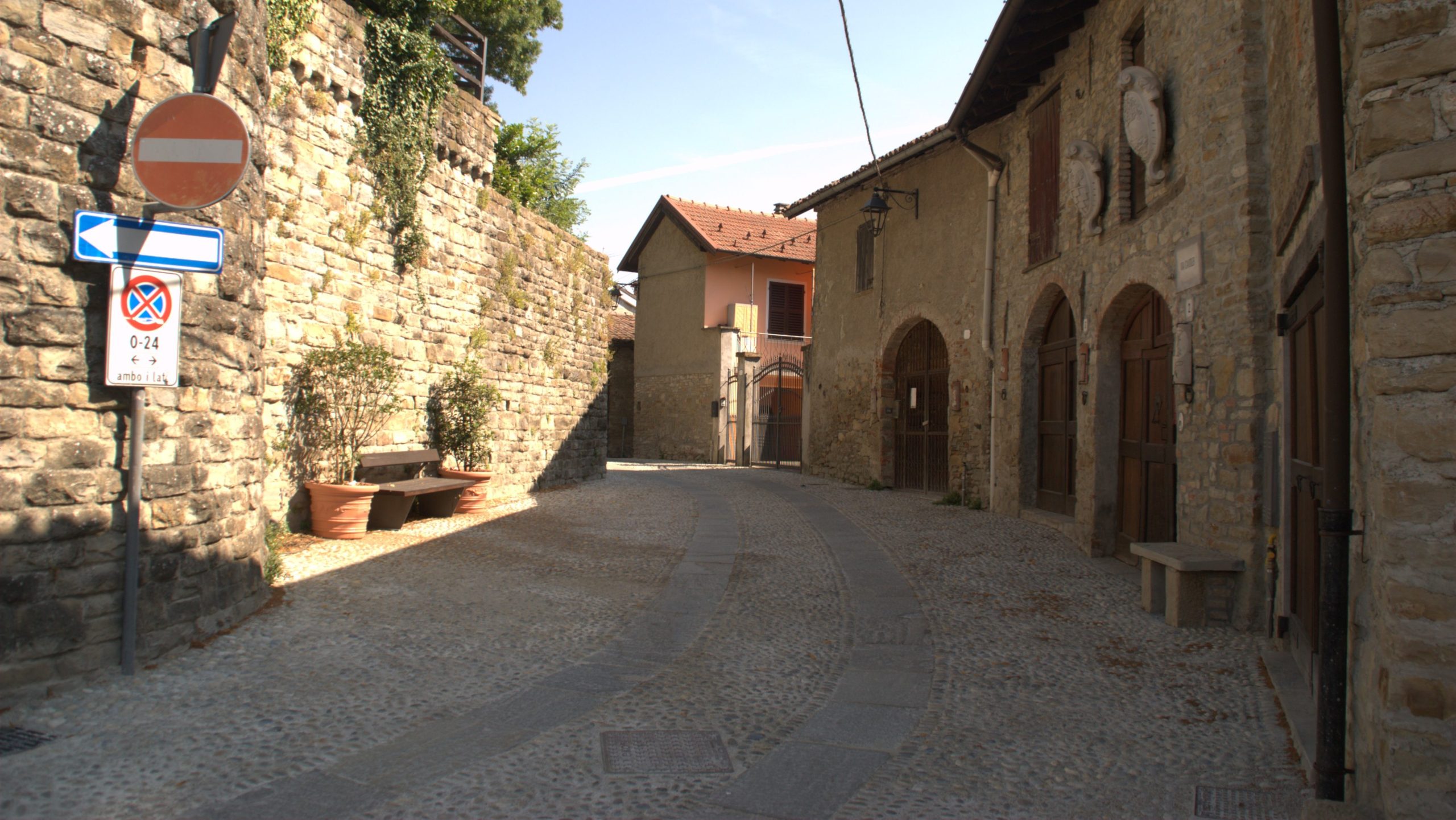 The characteristic of the second ring are the “arches” (3 in total) that cover Via Italia in some sections, real points of reference for road signs.
Instead the second ring also preserves the main panoramic points, starting from the church square up to the Belvedere in front of the village hall.
From these points you can see the Budello valley, towards Acqui Terme, the Borgo of Morsasco perched on the hill, in full view and, in the distance, the inhabited centers of the Bormida valley and the plain towards Alessandria. On this landscape, on clear days, Alps dominate (from Monviso to Monte Rosa).

While on the opposite side there are the views from the court and from the “Confurs”.
The “CONFURS” or, according to others “CONFURC” is the steep climb that connects Via Garibaldi to Via Italia, behind the war memorial, immediately after the second arch. 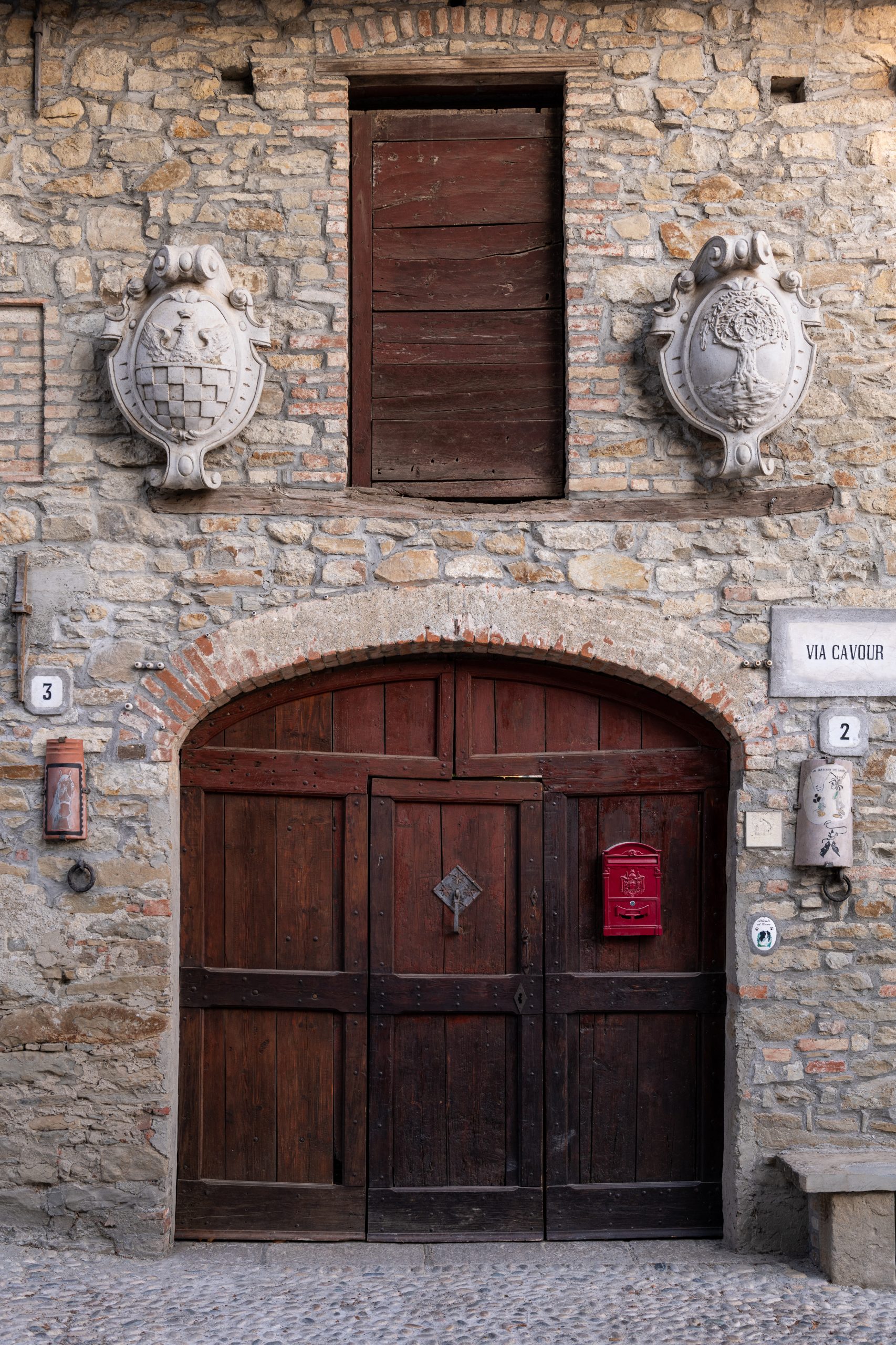 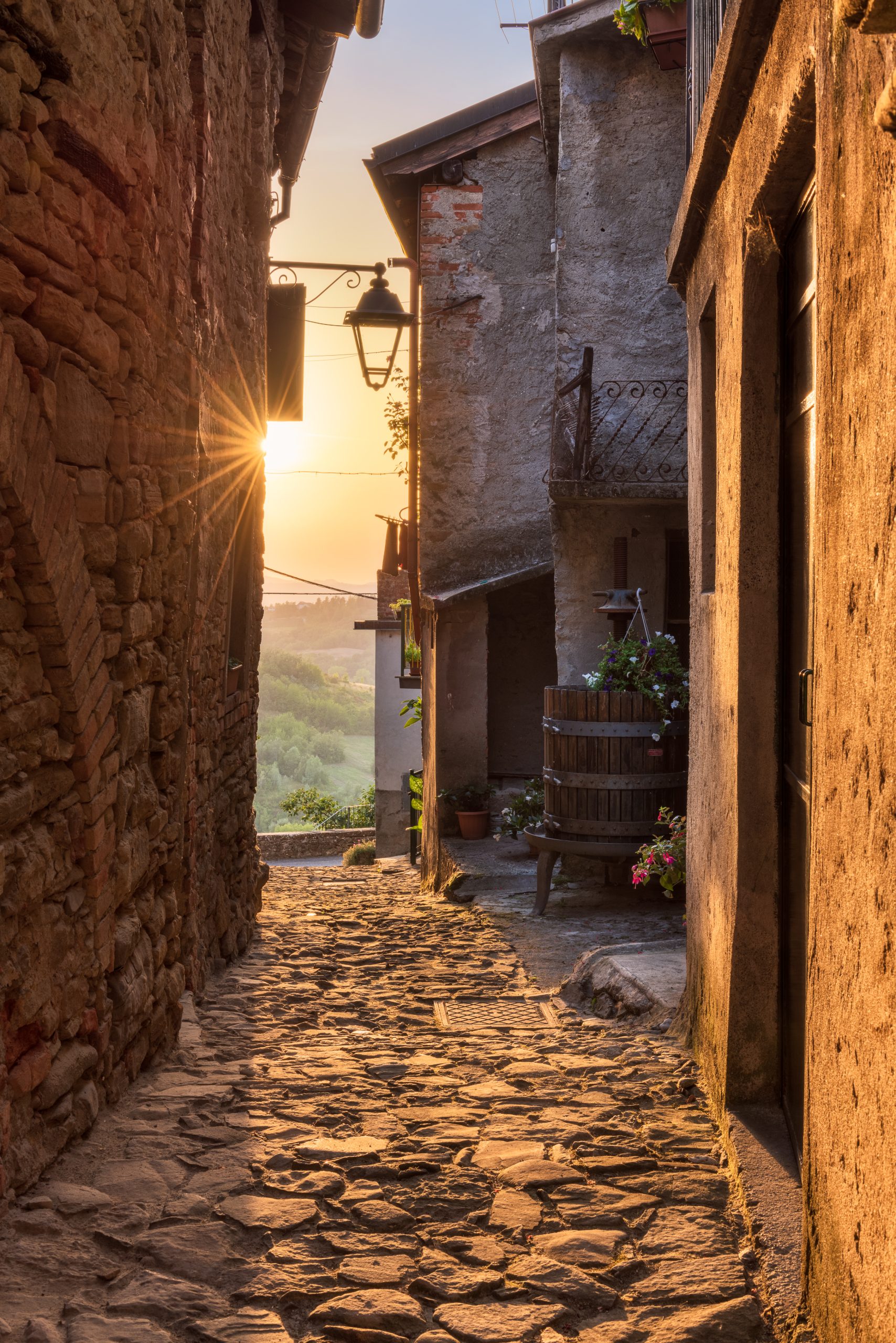 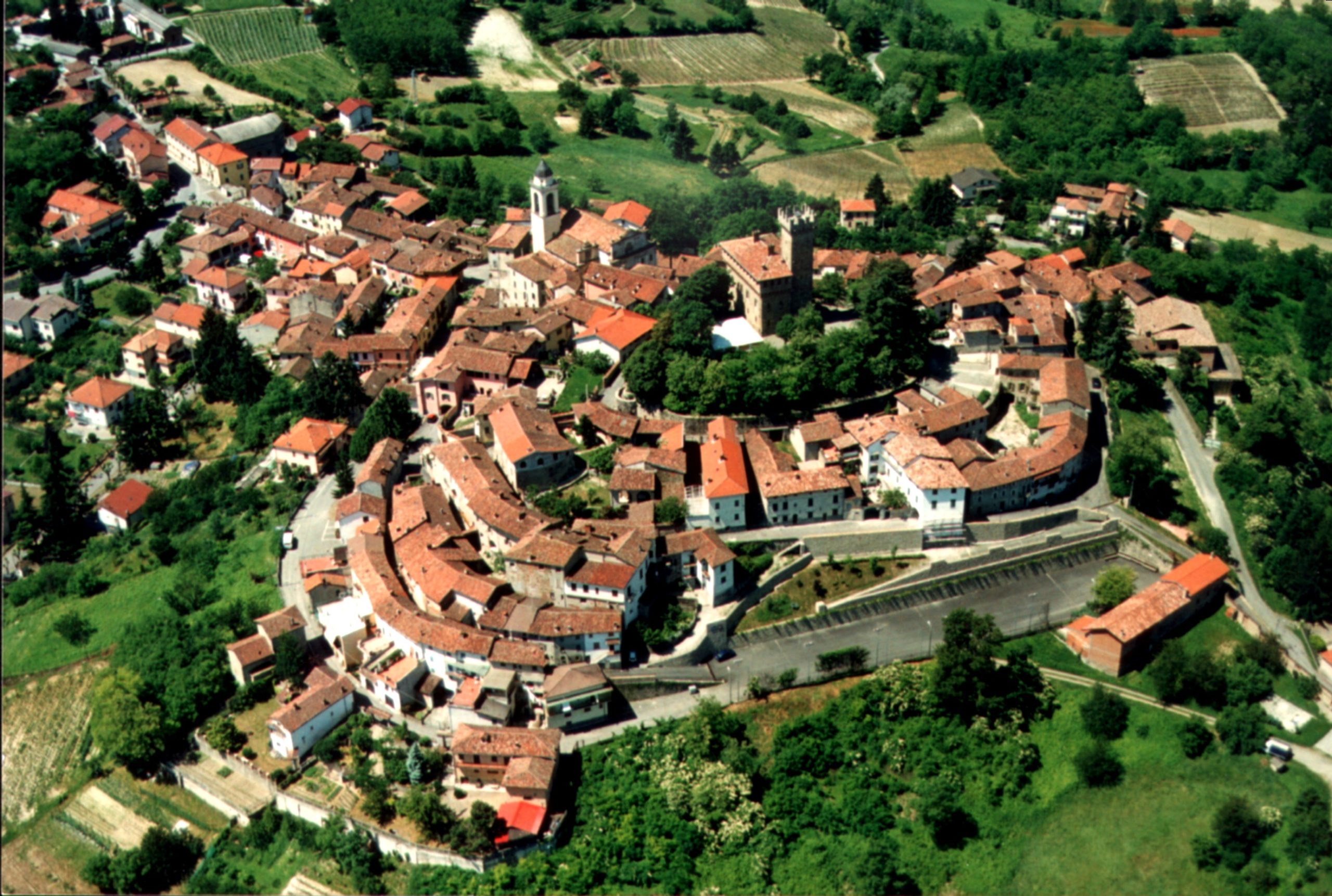 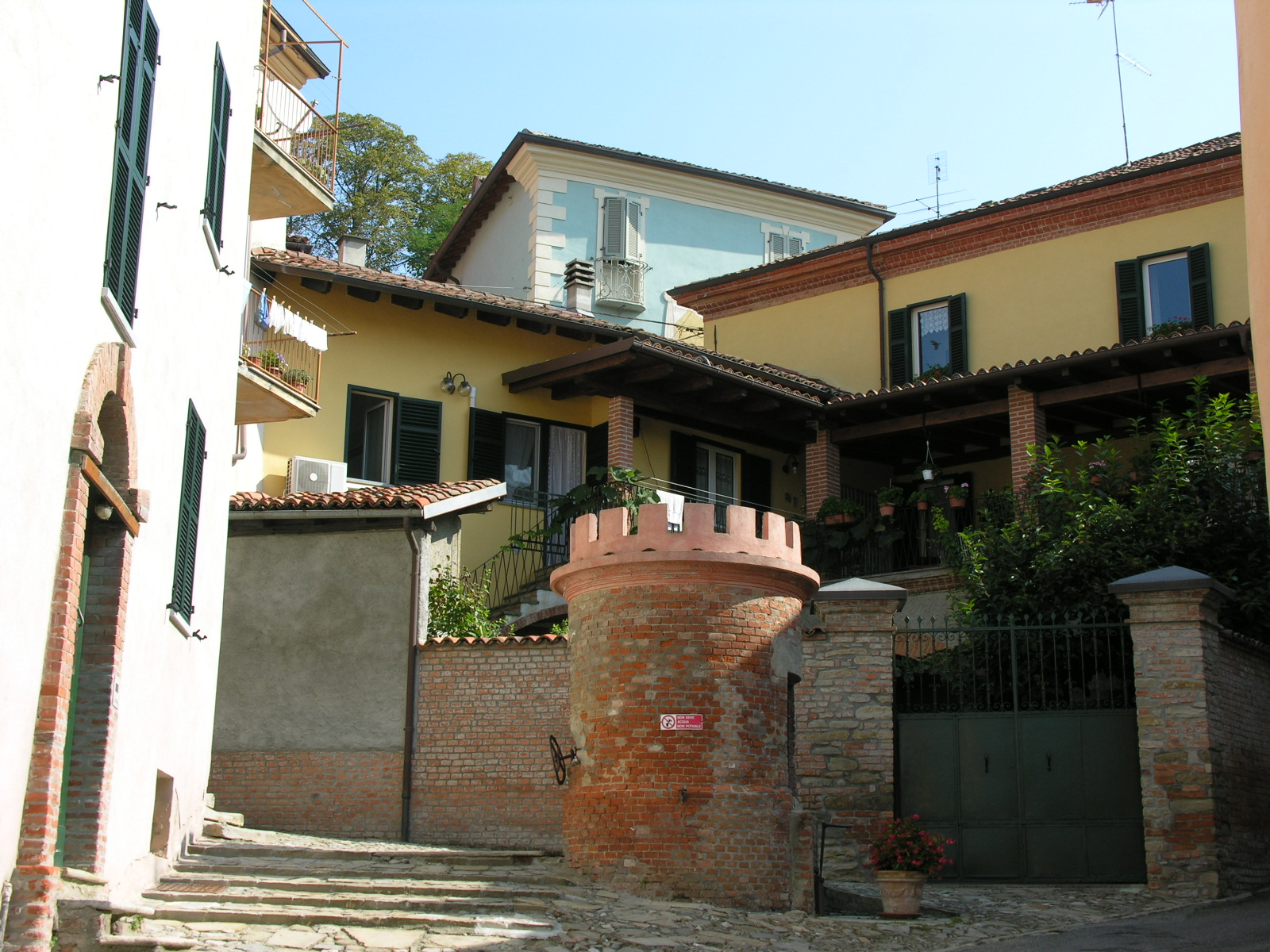 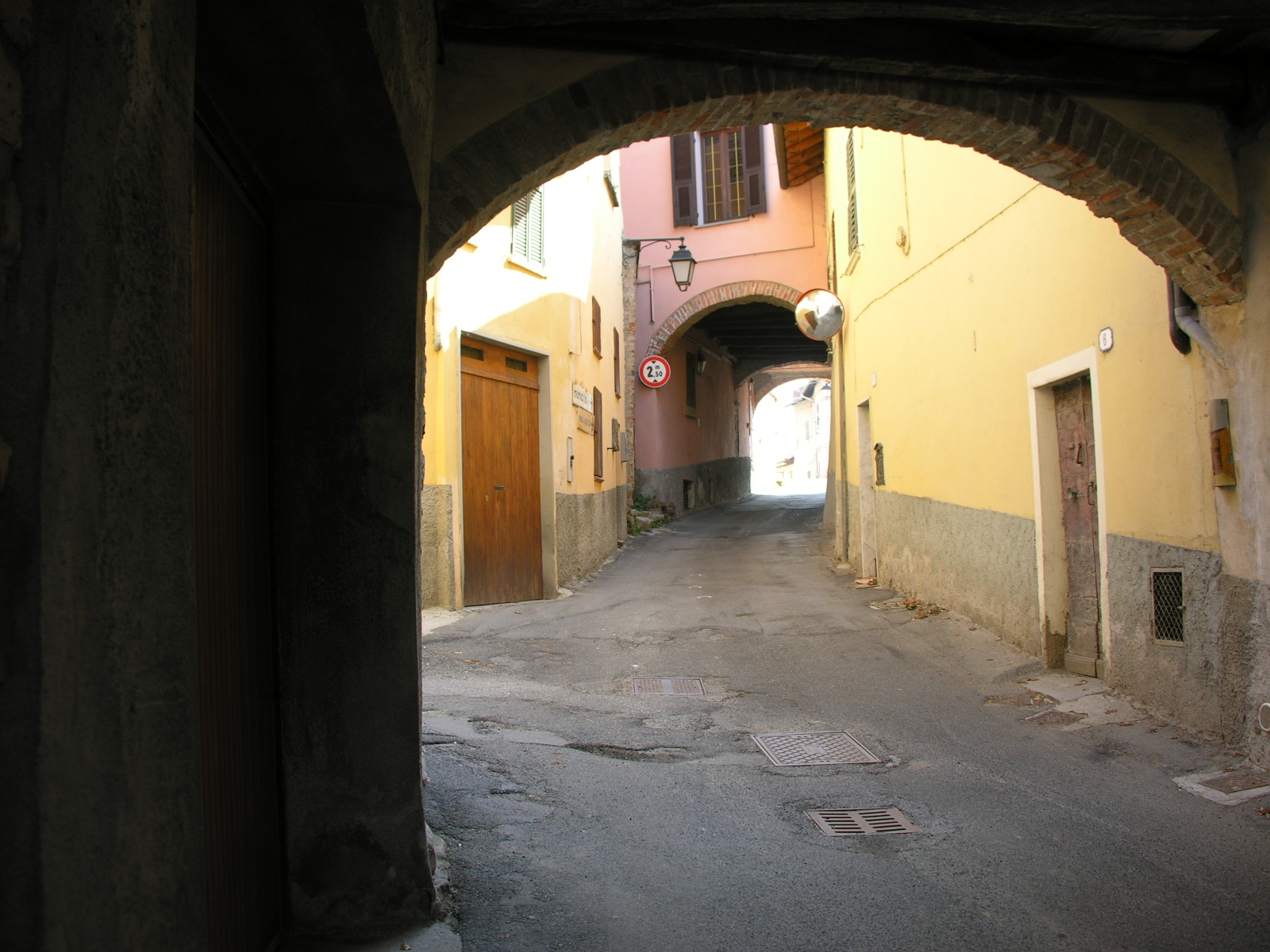 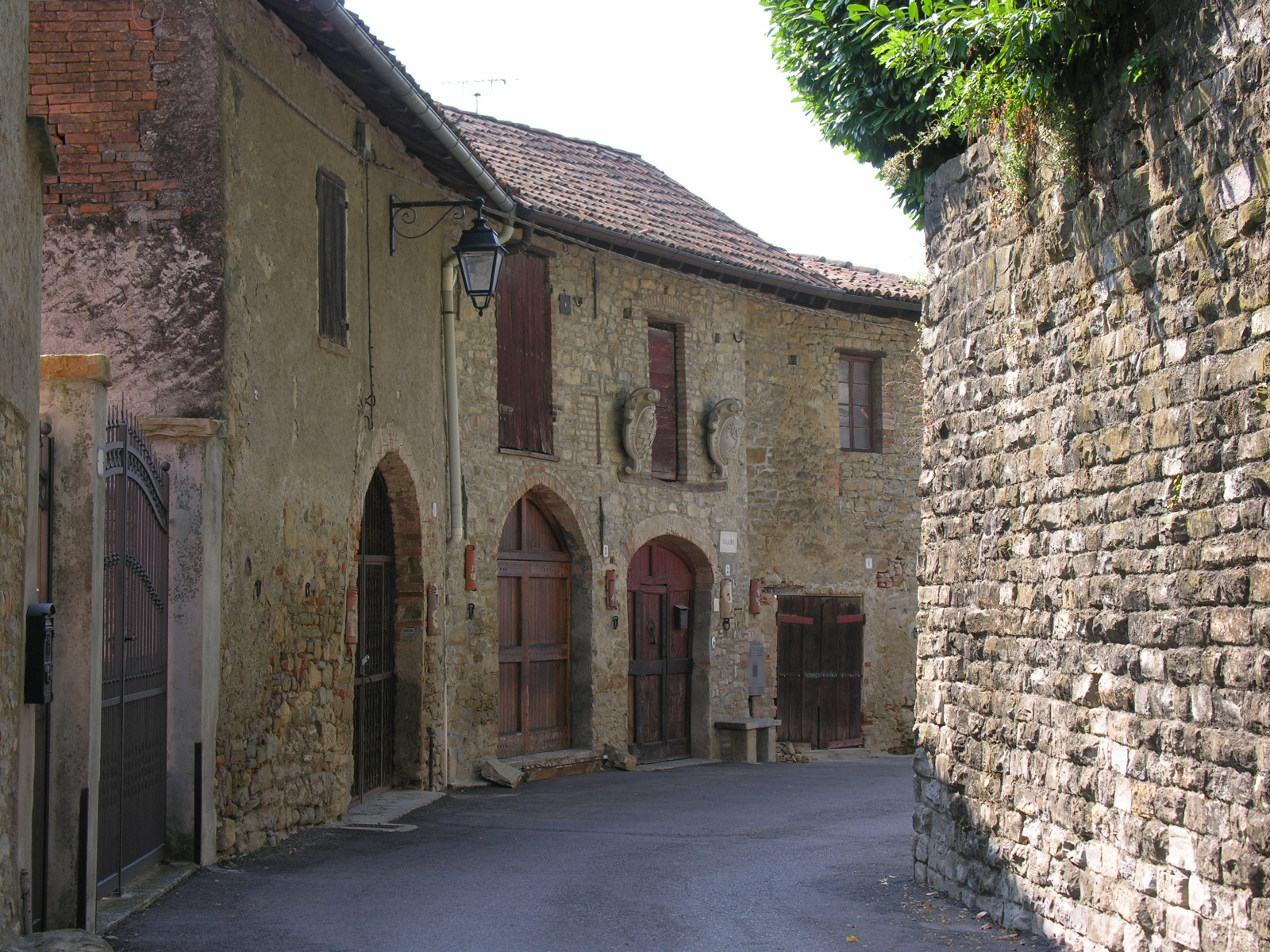 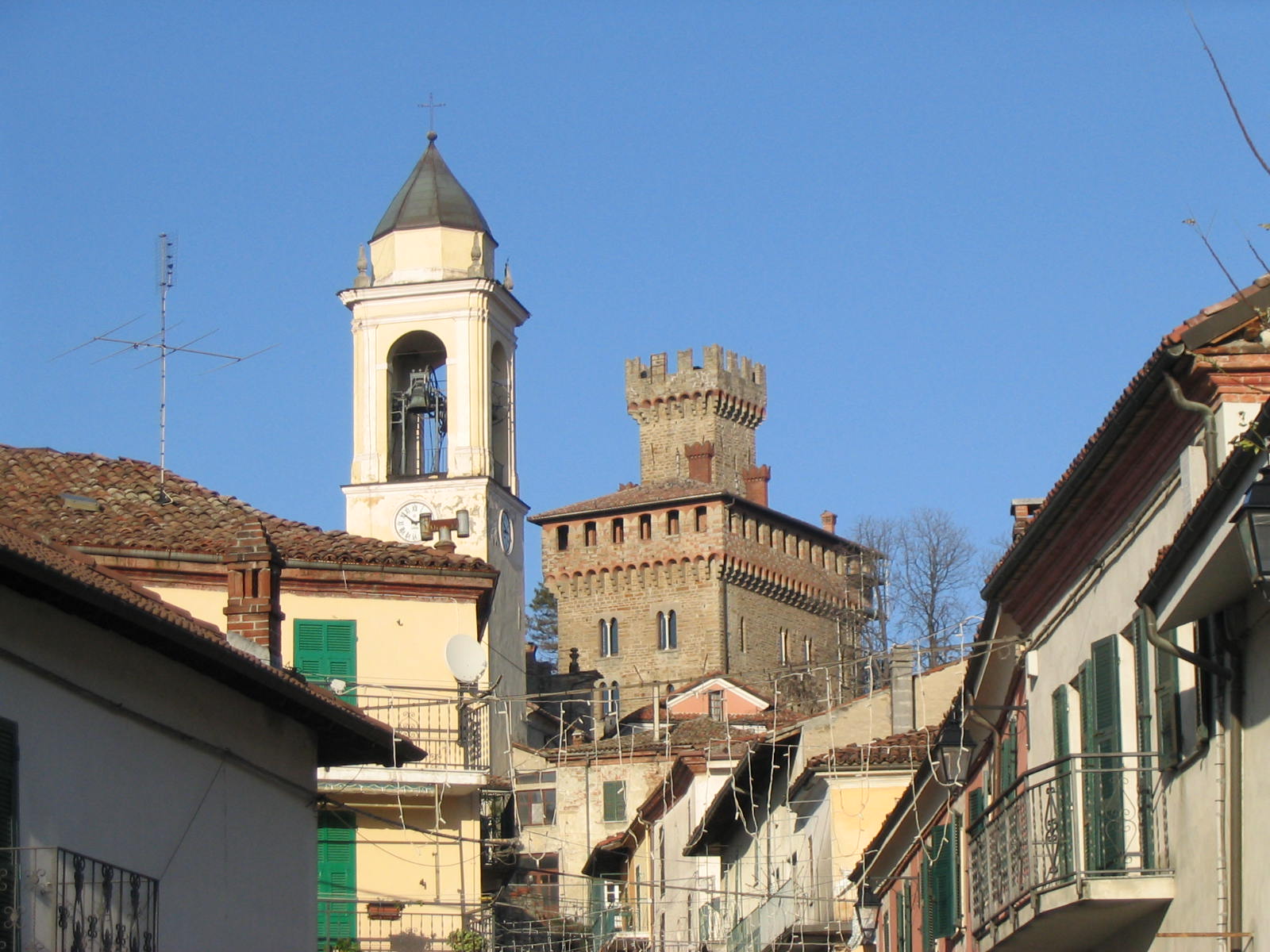 This area name echoes the presence of a “strong” point (confurc -> strongly) probably some wall or defensive work of the village.
From here the view dominates the multi-sports facility of the swimming pools and the Stanavasso valley, climbing towards Santo Stefano (towards Ovada) and towards the nearby village of Cremolino.
The second ring also preserves references to the ancient access gates to the Castrum, that is to the actual fortified village.

The main access point to the fortified village was nearby the current Municipio ( Village Hall – Palazzo de Rossi – Dogliotti), along the steep descent that still retains the name of “Ponte dell’Annunziata”.
Deriving is name (ponte = bridge, annunziata = annunciation) from the presence of a drawbridge and its moat.
The second door was placed, on the opposite side of the village, in correspondence of the lower arch, which is encountered going up (or going down) near the Well and the Vicarage .

Going down towards the third ring, a special mention deserves the “WELL”, a tower-shaped structure that rises near the first arch , in front of the rectory.
As the name indicates, it is an ancient water well, restored with its current shape and still active, with both the “hand pump”, the door and the wheel for drawing water still visible. 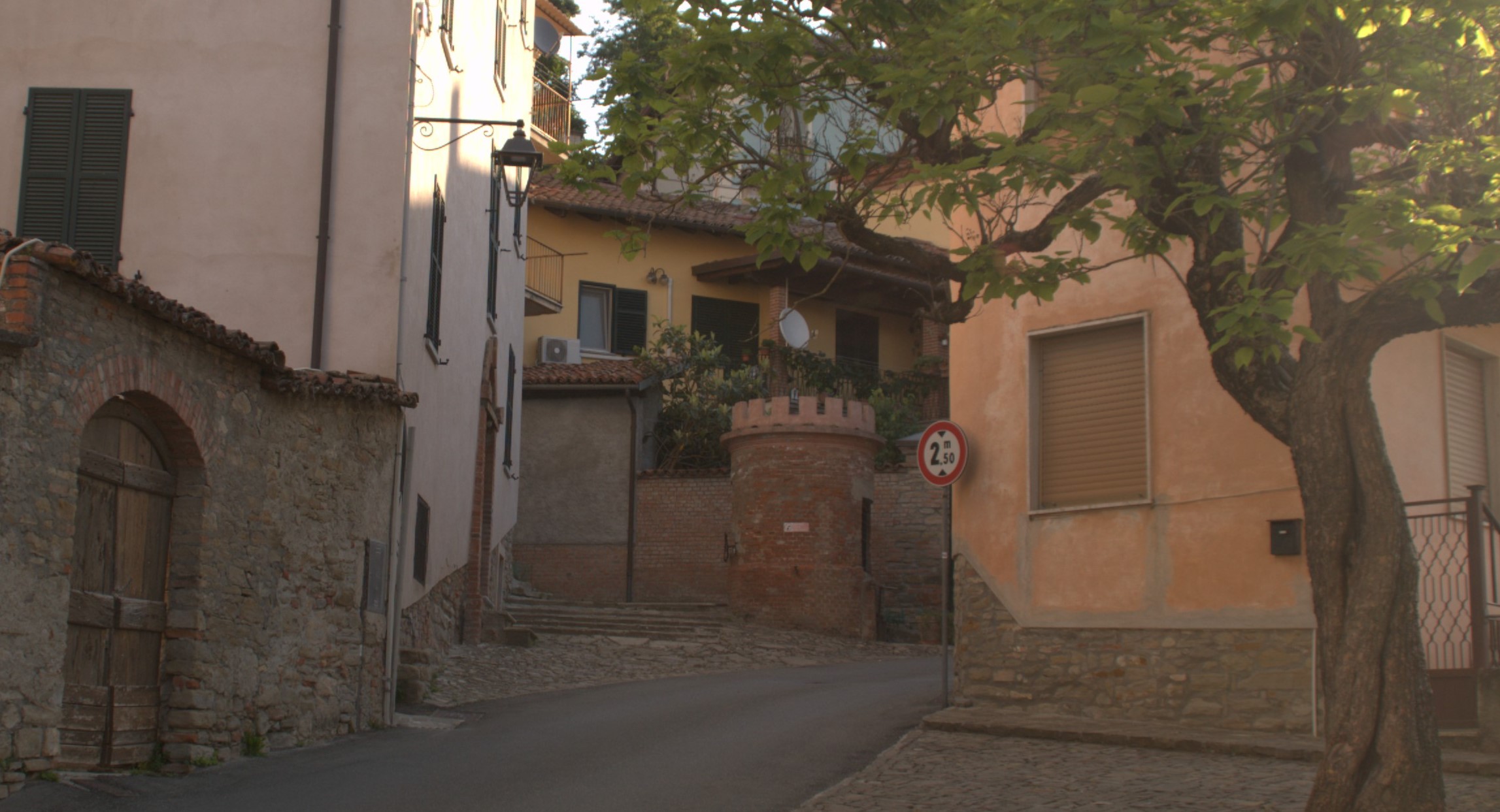 The third ring, now via Garibaldi and via Mazzini, contains the building of the Old School , the S.A.O.M.S with the bar, the war memorial , the little place dedicated to Cecilia della Valle, the court , where played “tambourine” and, below the town hall, facing north and therefore less exposed to the sun, where for this reason in the area was located the “icebox